Why is this important 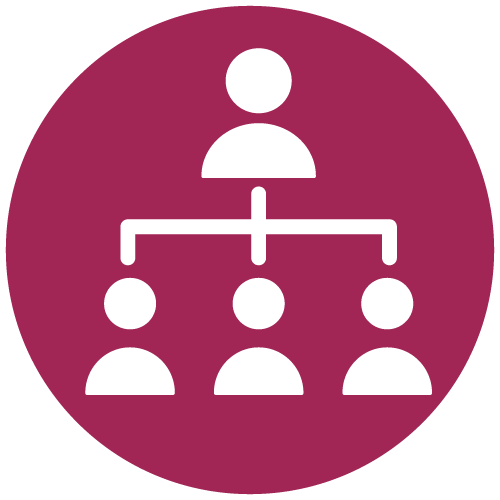 Stakeholder mobilization is a prerequisite towards building 100% sanitized cities. The National Urban Sanitation Policy (NUSP) suggests constituting a multi-stakeholder task force such as the City Sanitation Task Force (CSTF) or equivalent in order to ensure the city’s stakeholders demands and ideas are being represented in the public toilet planning and management.

How to go about it

2. Formation of the Public Toilet Taskforce: Building on existing structures

How to go about it

The Public Toilet Task Force is a multi-stakeholder platform that supports the public toilet planning, management and monitoring through a participatory approach. The Task Force’s main responsibilities include:

The below steps should be followed in selecting a suitable platform, format and members. 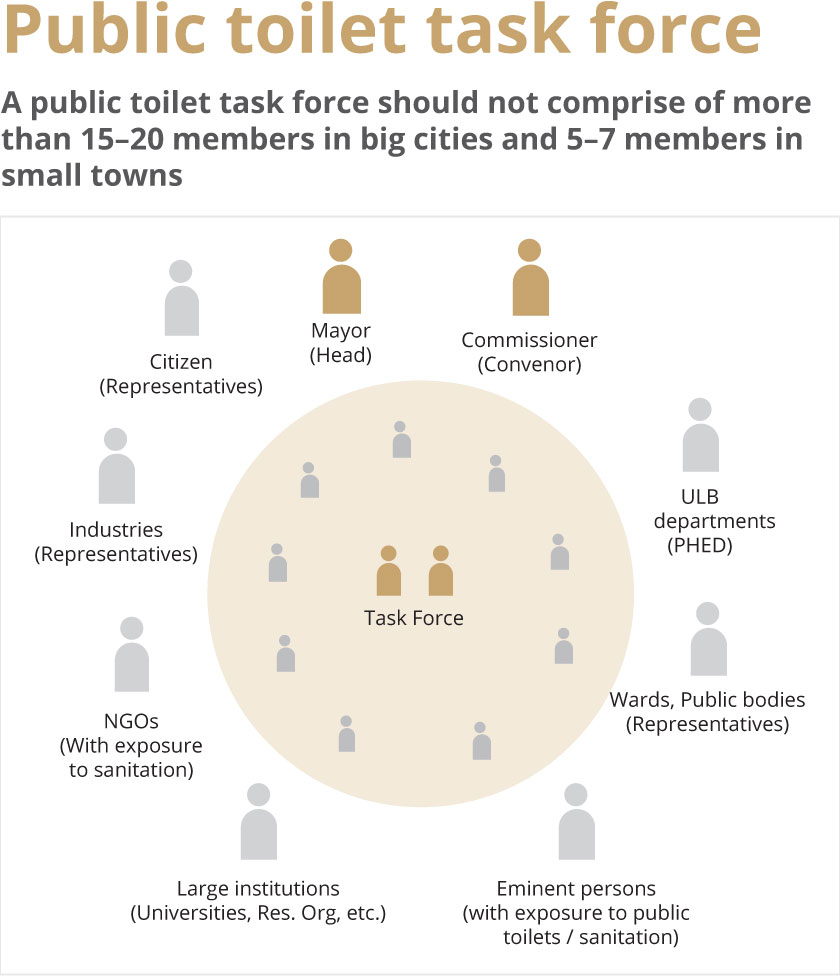 Stakeholders should include citizens, public institutions, businesses and industries, civic and professional organizations, training and educational institutions that have a clear interest and role in shaping their urban environment and ensuring the provision of public toilet facilities across the city. A public toilet task force should consist of 5–20 members, depending on the size of the city.

To ensure a participatory approach, relevant stakeholders should be identified along certain selection criteria (expertise, social outreach, resources, etc.), type of involvement and their potential role in the PTM process. Guiding questions could be: 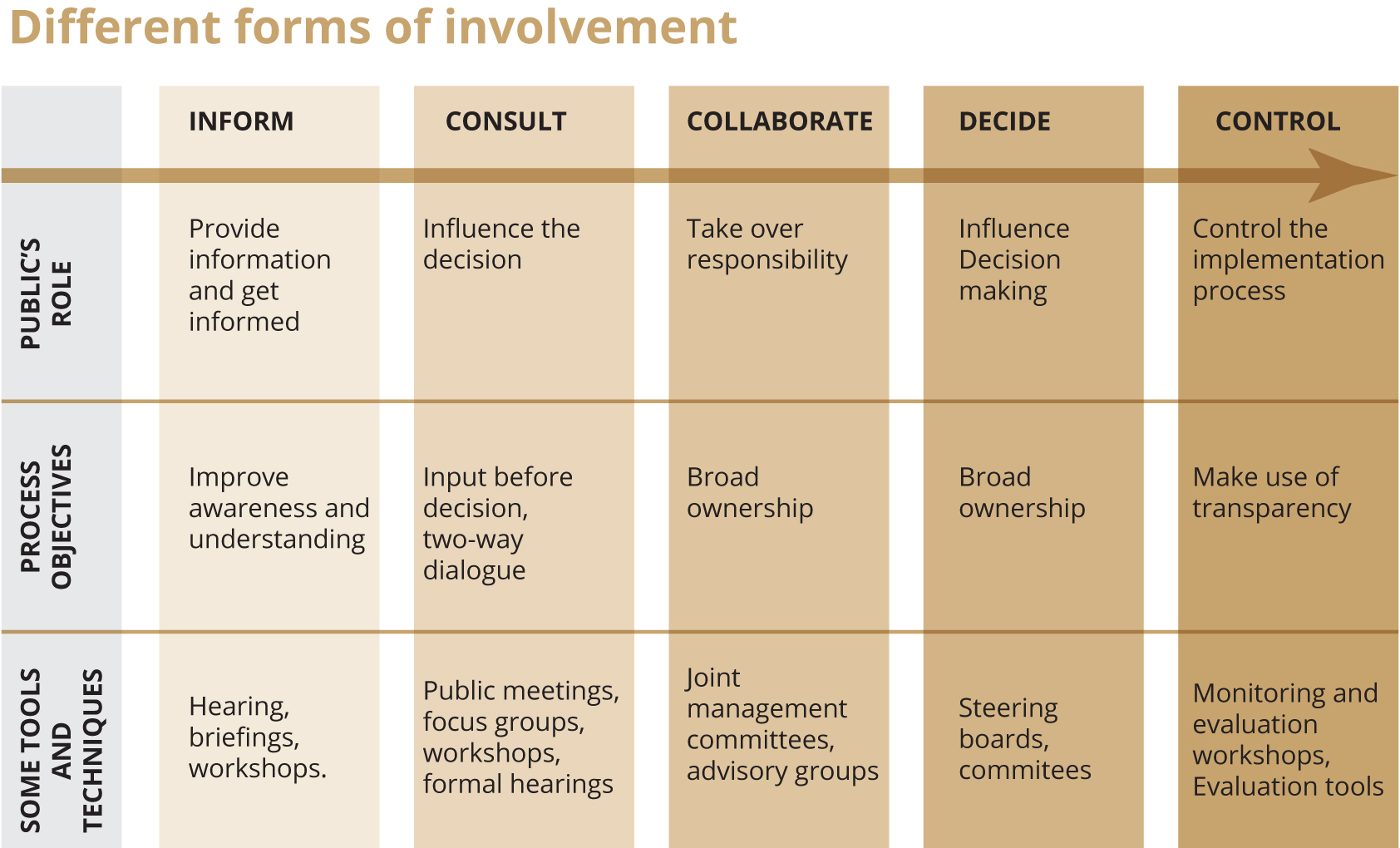 The Public Toilet Task Force should be a registered non-statutory body and recognized through a council resolution. In case a suitable multi-stakeholder platform (at city level) exists, it can be adapted to serve as the Public Toilet Task Force. An Implementation Agency (IA) and nodal officer for the PTM should be appointed. The IA should be an Urban Local Body (ULB), preferably the municipality, and will be responsible for:

(2) planning, implementing and monitoring the overall PTM and projects

The ULB formally notifies and publicizes the appointment of the Public Toilet Task Force and IA.

The Public Toilet Task Force should meet regularly (e.g. monthly to bi-annually) to steer the planning and monitor the provision and management of public toilet facilities across the city along the PTM process. 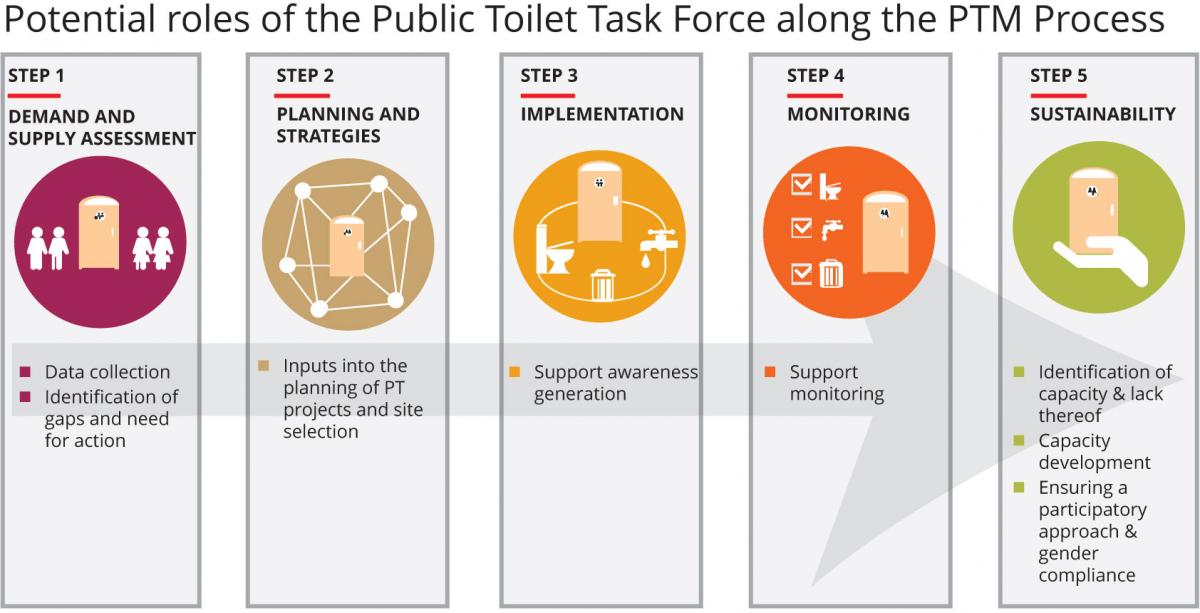 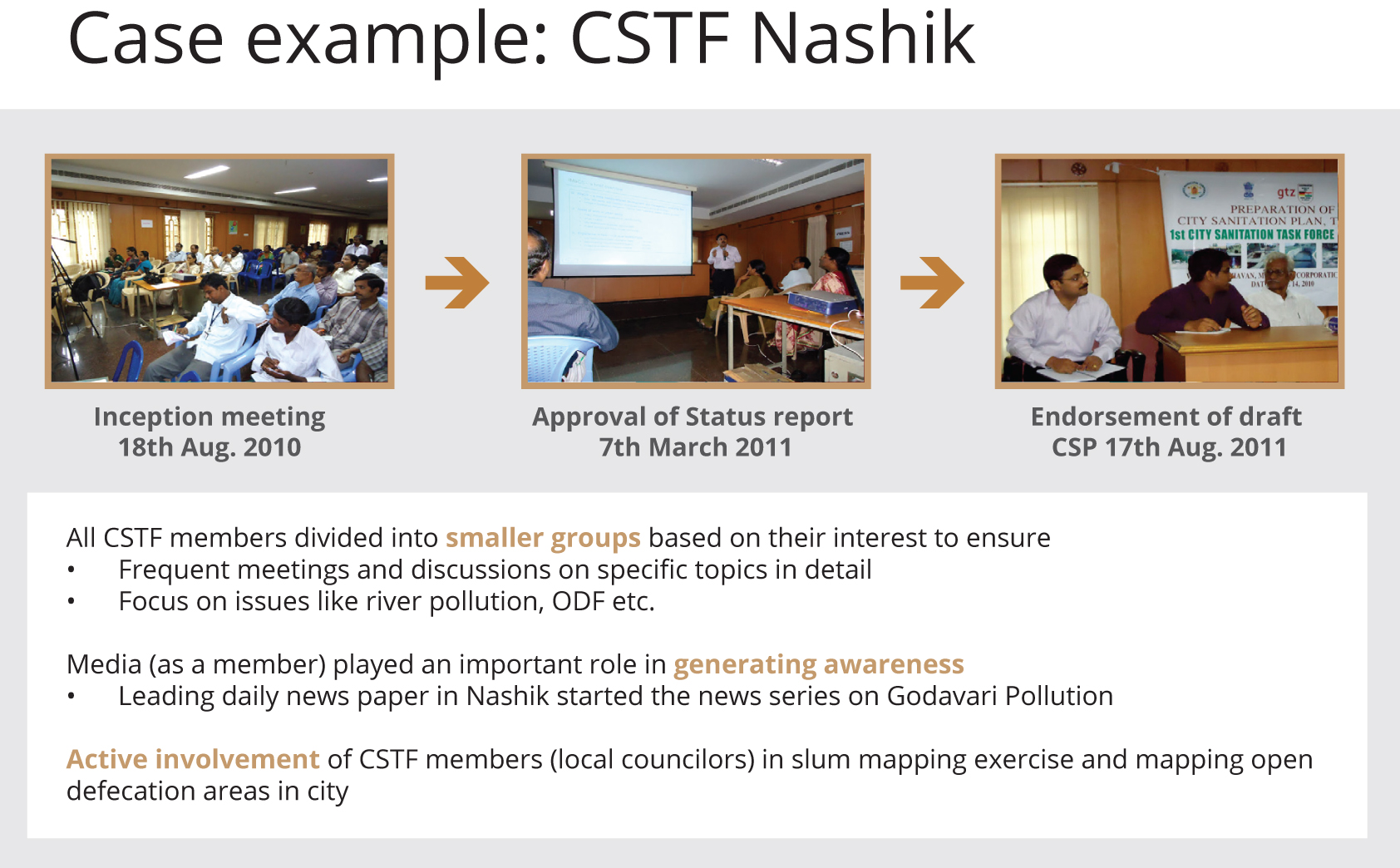 All CSTF members have been divided into smaller working groups that regularly meet and discuss specific topics. CSTF members (local councillors) have been actively involved in mapping of slums and open defecation areas in the city. Moreover, the media has been involved to generate awareness on PT and highlight the importance and relevance of sanitation facilities on health and the environment.

As part of the GIZ support, a Sanitation Task Force (STF) headed by the Commissioner and comprising officials from associated departments was constituted to support the various processes related to the public toilets management under the CSP implementation. Awareness raising and stakeholder consultations succeeded in bringing MC Shimla executive staff and council members from the three ruling parties together on one table to jointly work towards the improvement of sanitation in the city. The Sanitation Tasks Force’s members are the Commissioner, Assistant Commissioner, Chief Health Officer, Water Supply Engineer, Project Coordinator, EU Project, JNNURM Project Cell Representative, GIZ Technical Expert, as well as the Mayor, Deputy Mayor and interested council members on for them relevant subjects. The core group’s role is to support the process of developing various tools and instruments, inter-departmental coordination and acceptance of acknowledgement technical advice provided by GIZ. The decisions taken in the eight core group meetings since June 2014 have been forwarded to city council for approval and implementation. Key successes have been: (1) single point contact for discussions and decision making to support quick implementation; (2) fast track dissemination of information / clearances / multiple processes managed by the city; (3) inter-departmental knowledge sharing for incorporation and aligning of efforts; (4) a common technical decision point for obtaining council approvals.