The 10th SuSanA meeting was held on the 18th August 2009 in Stockholm at the World Water Week. A SuSanA side event "Sanitation systems and their links to climate change, food security, and urban development - The Sustainable Sanitation Alliance (SuSanA): A learning network" was also organised during the World Water Week.

During day 1 (Sunday 16th August): a SuSanA side event was held at the Stockholm World Water Week from 17.45h - 19.30h in Room T5. The event was convened by GTZ and co-convened by SEI-EcoSanRes, Eawag-Sandec, WB-WSP, UN- Habitat. Furthermore, a core group meeting was organised where presentations on the SuSanA vision document 2 "Sustainable pathways to reach the sanitation MDGs" and organisational issues were discussed.

The SuSanA plenary meeting was held on day 3 of the WWW, (Tuesday 18h August) from 17.45h to 21.30h in Room T6. During that meeting Gunilla Brattberg (SEI) welcomed all participants of the 10th SuSanA meeting and congratulated the winner of Stockholm Water Prize, honourable Dr. Bindeshwar Pathak (Sulabh International), highlighting the great work he did for the sanitation community. She pointed out that the SuSanA was an excellent example of the importance of networking and communication among partners. She went back to the history of the SuSanA from the humble beginning in 2007 with a kick-off meeting in Eschborn and the further development into a continuously growing network of now more then 100 organisations. She mentioned that the SuSanA was mainly formed in view of the IYS in 2008 but she very much welcomed the final decision that was taken in Macao last year to continue with the SuSanA even after IYS 2008. She furthermore pointed out that all the partner organisations had accumulated a lot of knowledge on sustainable sanitation over the years that needed to be spread and used, and that SuSanA could play a very important role in spreading this knowledge.

On behalf of the SuSanA Arno Rosemarin presented a gift to the Stockholm Water Prize winner Dr. Bindeshwar Pathak from Sulabh International. The gift was a certificate of a donation to build one ecosan toilet in Burkina Faso. This was part of the ‘Toilet Without Borders’ project that raises money in order to adopt or sponsor toilets in Burkina Faso. Linus Dagerskog (CREPA) briefly explained the concept and mentioned that 12 toilets were already established and an additional 25 were planned. One of the toilets would be built in the name of Dr. Pathak, which would support one family with a toilet to improve their sanitation situation and allow them to grow food by reusing the nutrient rich excreta in agriculture. Arno finally mentioned that the SuSanA group thought that it was the kind of gift Dr. Pathak would like to give.

Agenda & minutes of the meeting

Agenda of the side event at the World Water Week, August 16

Agenda of the plenary meeting in Stockholm, August 18

Minutes of the meetings

Impressions of the meeting 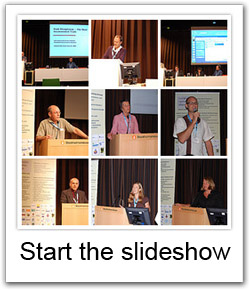 Introduction to SuSanA and the Agenda of the Meeting
Arne Panesar, GTZ