What influences open defecation and latrine ownership in rural households? - Findings from a global review 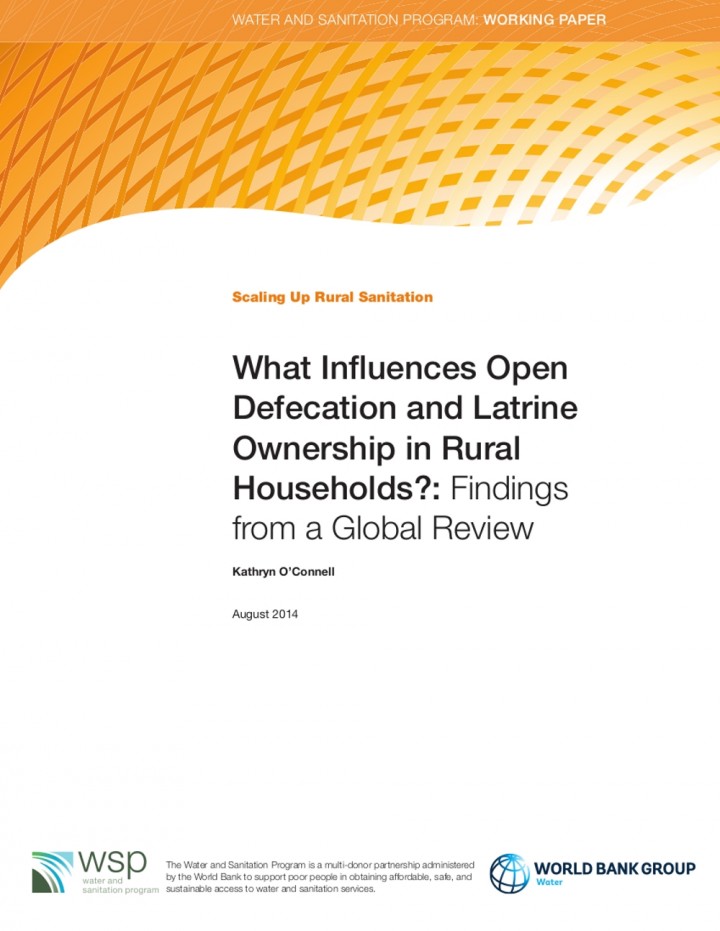 WSP’s Scaling Up Rural Sanitation is working with governments and the local private sector to develop the knowledge needed to scale up rural sanitation for the poor. The programmatic approach combines Community-Led Total Sanitation (CLTS), behaviour change communication, and sanitation marketing to generate sanitation demand and build up the supply of sanitation products and services at scale. In addition, WSP works with local and national governments and the local private sector to strengthen the enabling environment—including institutional, regulatory, financial, service-delivery, and monitoring capacities—to achieve change that is sustainable. Starting in India, Indonesia, and Tanzania in 2006, Scaling Up Rural Sanitation is currently being implemented in more than a dozen countries.
This Working Paper is one in a series of knowledge products designed to showcase project findings, assessments, and lessons learned through WSP’s Scaling Up Rural Sanitation initiatives. This paper is conceived as a work in progress to encourage the exchange of ideas about development issues.

Key findings:
The most salient factors influencing rural sanitation behaviours that emerged from the review include access to and
availability of functioning latrines, sanitation products, and services; latrine product attributes (e.g., perceptions of cleanliness and durability); social norms around open defecation; perceived latrine affordability; self-efficacy to build
latrines; and competing priorities for other household expenditures. The review also identified a number of emotional, social, and physical drivers. These include shame and embarrassment associated with open defecation, as well as perceptions of improved social status, privacy, and convenience associated with latrine ownership and use. A number of background characteristics influence sanitation behaviours. These include socioeconomic status, as well as contextual factors that vary by region or country, such as perceptions of physical and geographical conditions (e.g., access to water and soil profile), seasonal factors, and the time of year.

Key factors that were found to influence rural sanitation behaviours based on the SaniFOAM conceptual framework are highlighted in figure 1 on page V. It also includes an additional new factor in the focus section of the framework (sociodemographic and background characteristics), to demonstrate the relevance of a number of background and contextual factors that were deemed relevant to rural sanitation behaviours.

The review identified several other factors, including knowledge, enforcement of rules or regulations, values, intention to build latrines, roles and decision-making, and beliefs and attitudes. However, it is less certain how these aspects influence sanitation behaviors, thus limiting the strength of the conclusions that can be made. Th is may be due to the different research objectives and interview guides of the studies, quality of the data and reporting, regional differences, and/or their relevance to sanitation behaviours.