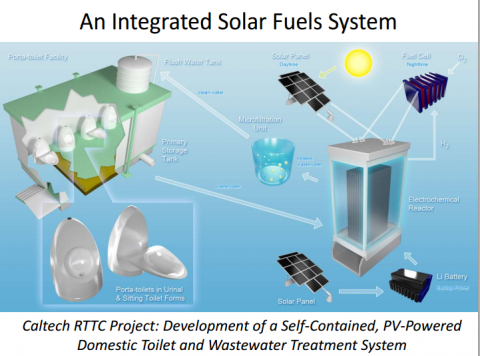 This library entry contains background documents for a grant that Michael Hoffmann is leading and which is funded by the Bill and Melinda Gates Foundation.

Further information and a discussion is available on the SuSanA discussion Forum, see link below.

Short description of the project:

The goal of this project is to design a self-contained, solar-powered domestic toilet and wastewater treatment system. The solar panel will convert the sun’s rays into enough energy to power an electrochemical reactor that Hoffmann designed to break down water and human waste into hydrogen gas. The gas can then be stored in hydrogen fuel cells to provide a backup energy source for nighttime operation or for use under low-sunlight conditions.

Objectives:
On a pilot-plant scale with have developed a transportable prototype design for the treatment of raw domestic wastewater, human urine, human feces, and synthetic human waste analogues. After several hours of PV-powered electrochemical treatment, the turbid, black-water influent can be clarified with the elimination of the suspended particles along with the reduction or total elimination of the chemical oxygen demand (COD), total enteric coliform disinfection via in situ reactive chlorine species generation, and the elimination of measurable protein after 3 to 4 hours of PV-powered treatment. Our Phase II prototype incorporates additional features such as a residual sludge handling unit, a hydrogen purification and filter system, a closed water reuse We have packaged our second-generation prototypes into modified shipping containers are ready for field testing in remote locations that lack traditional urban infrastructure. Alternative applications include electrochemically-enhanced septic tanks.

We have developed an infrastructure-free, self-contained wastewater treatment system that incorporates a series of PV-powered electrolysis cells that generate molecular hydrogen for subsequent conversion to electricity in a hydrogen fuel cell. First, we will report on the efficacy of a laboratory-scale using real human waste containing feces and urine using bismuth oxide doped titanium dioxide (BiOx/TiO2) electrode arrays.

A comprehensive environmental analysis has been coupled together with a robust kinetic model based under the chemical reaction limited regime to investigate the role of various redox reactions mediated by chloride present in human waste. Under current densities (J) higher than 200 A m–2, the oxidative elimination of the chemical oxygen demand (COD) and ammonium ion can be modeled using experimentally-determined pseudo first-order rate constants and current efficiencies In combination with an anaerobic pretreatment step, the real human wastes including COD, protein and color are eliminated within 6 hours of continuous treatment in the electrochemical reactor array.