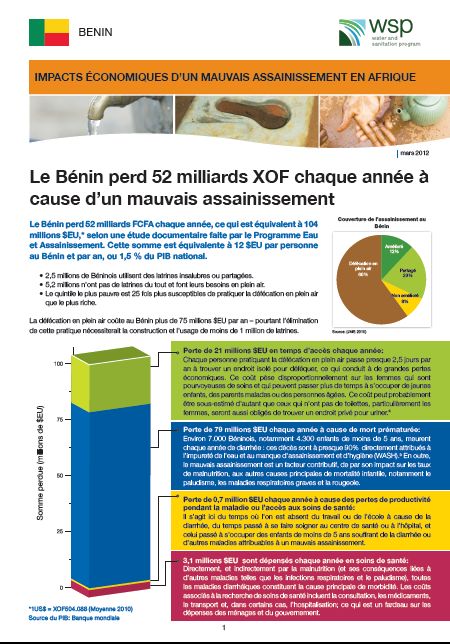 This study provides an estimation of economic impacts on populations without access to improved sanitation in order to provide information on the losses to society of the current sanitation situation. While not all these economic impacts can be immediately recovered from improved sanitation practices, it provides a perspective on the short- and longer-term economic gains that are available to countries through a range of policies to mitigate these impacts. Underlying data sets to estimate economic impacts are weak; the study therefore uses objectively verified data sources and conservative numbers to estimate economic impacts. Several impacts have been excluded due to lack of data. Therefore the total costs of poor sanitation reported are likely to significant underestimate the true costs. The desk study, Economic Impacts of Poor Sanitation in Africa, found the majority of these costs to production come from annual premature deaths, including children under the age of five, due to diarrheal disease. Nearly 90 percent of these deaths are directly attributable to poor water, sanitation, and hygiene. Other significant costs were productivity losses from poor sanitation, and time lost through the practice of open defecation. Adverse impacts of inadequate sanitation that are likely to be significant, but difficult and expensive to estimate, include the costs of epidemic outbreaks; losses in trade and tourism revenue; impact of unsafe excreta disposal on water resources; and the long-term effects of poor sanitation on early childhood development.

Eighteen African countries lose around US$5.5 billion every year due to poor sanitation, with annual economic losses between 1 percent and 2.5 percent of GDP, says a new report by the World Bank’s Water and Sanitation Program (WSP).

(reports are in French for the French-speaking countries)