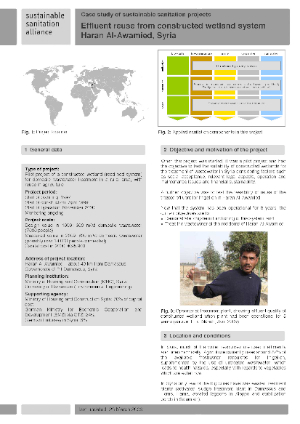 This is a case study about a pilot project of a constructed wetland (reed bed system) for domestic wastewater treatment in a rural area, with reuse in agriculture in Syria. It was implemented by GTZ on behalf of the German Ministry BMZ. The aim is to test the suitability of constructed wetlands for the treatment of wastewater in Syria considering factors such as social acceptance, relevant legal aspects, operation and maintenance issues and financial sustainability.

In Syria, much of the water resources are used inefficiently and uneconomically. Agriculture currently uses around 87% of the available freshwater resources for irrigation, supplemented by the use of untreated wastewater, which leads to health hazards.

Construction began in April 1999, and the operation of the plant began 1.5 years later in November 2000. The design value for the wastewater treatment system was 7,000 people and 43 L per person per day, which is a rather low figure compared to more affluent populations. The treatment plant thus has a design capacity to treat 300 m³/d. However, the actual measured influent flowrate in 2009 was about 600 m3/d, due to population growth in the area. Thus, the plant is now overloaded, but appears to be functioning quite well (albeit at its limits, with some water-logging being evident).

The treated wastewater fulfills the irrigation water quality set by the Syrian Arab Organization for Standardization and Metrology (SASMO) which are based on the WHO standards, and were recently updated (in 2008).