Are Menstrual Cups regulated by governments around the world? 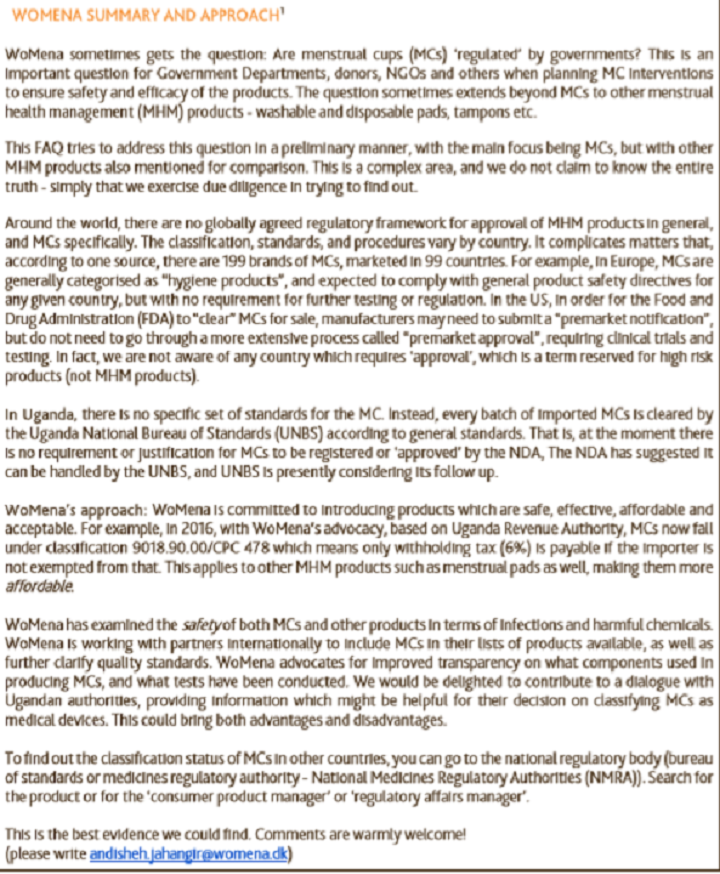 WoMena sometimes gets the question: Are menstrual cups (MCs) ‘regulated’ by governments? This is an important question for Government Departments, donors, NGOs and others when planning MC interventions to ensure safety and efficacy of the products. The question sometimes extends beyond MCs to other menstrual health management (MHM) products – washable and disposable pads, tampons etc.

This FAQ tries to address this question in a preliminary manner, with the main focus being MCs, but with other MHM products also mentioned for comparison. This is a complex area, and we do not claim to know the entire truth – simply that we exercise due diligence in trying to find out.
Around the world, there are no globally agreed regulatory framework for approval of MHM products in general, and MCs specifically. The classification, standards, and procedures vary by country. It complicates matters that, according to one source, there are 199 brands of MCs, marketed in 99 countries. For example, in Europe, MCs are generally categorised as “hygiene products”, and expected to comply with general product safety directives for any given country, but with no requirement for further testing or regulation. In the US, in order for the Food and Drug Administration (FDA) to “clear” MCs for sale, manufacturers may need to submit a “premarket notification”, but do not need to go through a more extensive process called “premarket approval”, requiring clinical trials and testing. In fact, we are not aware of any country which requires ‘approval’, which is a term reserved for high risk products (not MHM products).

In Uganda, there is no specific set of standards for the MC. Instead, every batch of imported MCs is cleared by the Uganda National Bureau of Standards (UNBS) according to general standards. That is, at the moment there is no requirement or justification for MCs to be registered or ‘approved’ by the NDA, The NDA has suggested it can be handled by the UNBS, and UNBS is presently considering its follow up.

WoMena’s approach: WoMena is committed to introducing products which are safe, effective, affordable and acceptable. For example, in 2016, with WoMena’s advocacy, based on Uganda Revenue Authority, MCs now fall under classification 9018.90.00/CPC 478 which means only withholding tax (6%) is payable if the importer is not exempted from that. This applies to other MHM products such as menstrual pads as well, making them more affordable.

WoMena has examined the safety of both MCs and other products in terms of infections and harmful chemicals. WoMena is working with partners internationally to include MCs in their lists of products available, as well as further clarify quality standards. WoMena advocates for improved transparency on what components used in producing MCs, and what tests have been conducted. We would be delighted to contribute to a dialogue with Ugandan authorities, providing information which might be helpful for their decision on classifying MCs as medical devices. This could bring both advantages and disadvantages.

To find out the classification status of MCs in other countries, you can go to the national regulatory body (bureau of standards or medicines regulatory authority – National Medicines Regulatory Authorities (NMRA)). Search for the product or for the ‘consumer product manager’ or ‘regulatory affairs manager’.

WoMena (2020). Are Menstrual Cups regulated by governments around the world?. WoMena