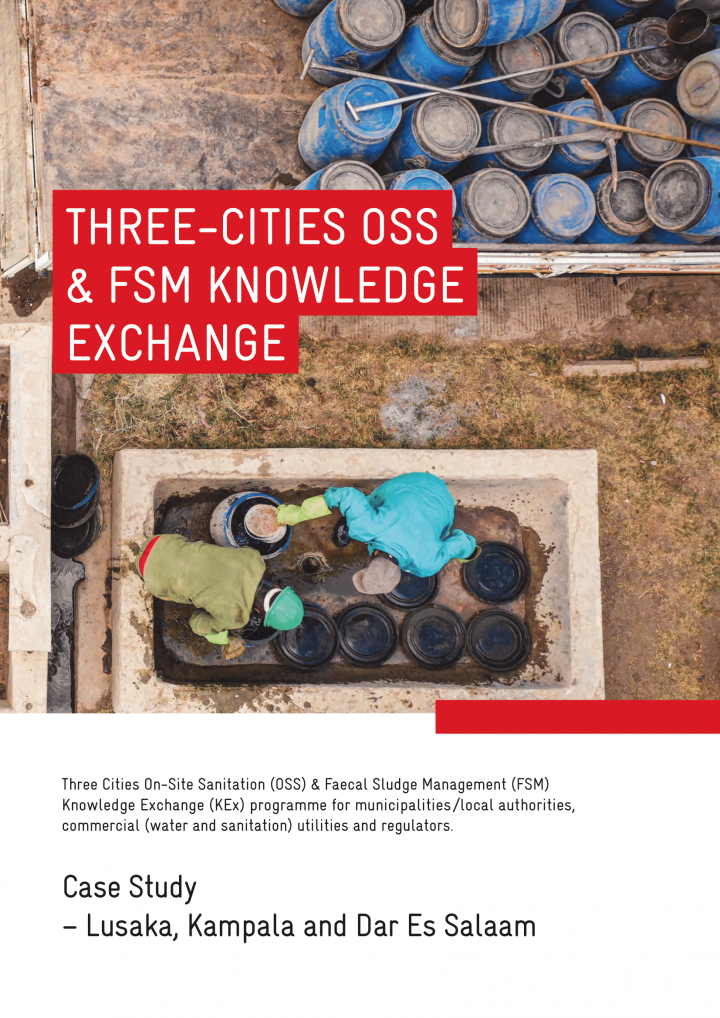 The Three Cities On-Site Sanitation (OSS) and Faecal Sludge Management (FSM) Knowledge Exchange (KEx) Case study provides detailed highlights of the capacity development initiative that was undertaken in three sub-Saharan African cities; Kampala (Uganda), Dar Es Salaam (Tanzania) andLusaka (Zambia). The KEx initiative was aimed at enabling keystakeholders from the three cities municipalities/ local authorities, commercial water and sanitation utilities and regulators to be able to make informed decisions in the field of OSS and FSM by learning and exchanging from the approaches, opportunities and challenges of existing OSS and FSM frameworks from the other participating cities.

The first chapter of this document describes the concept and methodology of the KEx in general as well as the thinking behind the Three Cities OSS and FSM KEx initiative.

The following chapter provides detailed information on OSS and FSM within the three participating cities of the KEx. Information includes demographics, stakeholder mappings, institutional and regulatory frameworks as well as city specific information regarding OSS and FSM along the sanitation service chain.

Based on the knowledge gained during the KEx, participants developed lessons learnt which include a comparison. They include a comparison of the sanitation status quo of the three participating cities, the enabling and limiting factors for OSS and FSM as well as a way forward to improve sanitation in each of the participating cities. Enabling factors identified include but are not limited to: private sector engagement, technology, digital approaches, institutional arrangement, capacity building, enforcement, community participation and engagement and research. Enabling factors that support service delivery along the OSS and FSM service chain are cardinal for service and management success. Identified limitations affecting OSS and FSM for stakeholders from the three cities include but are not limited to: insufficient amount of FSM treatment facilities, inadequate service provision, inadequate financial ability for some customers to pay faecal sludge services, lack of prioritisation of sanitation needs at the political and household level, community awareness on sanitation and its importance, lack of capacity and knowledge amongst many actors, limited private sector engagement and lack of experience in a sustainable FSM business model.