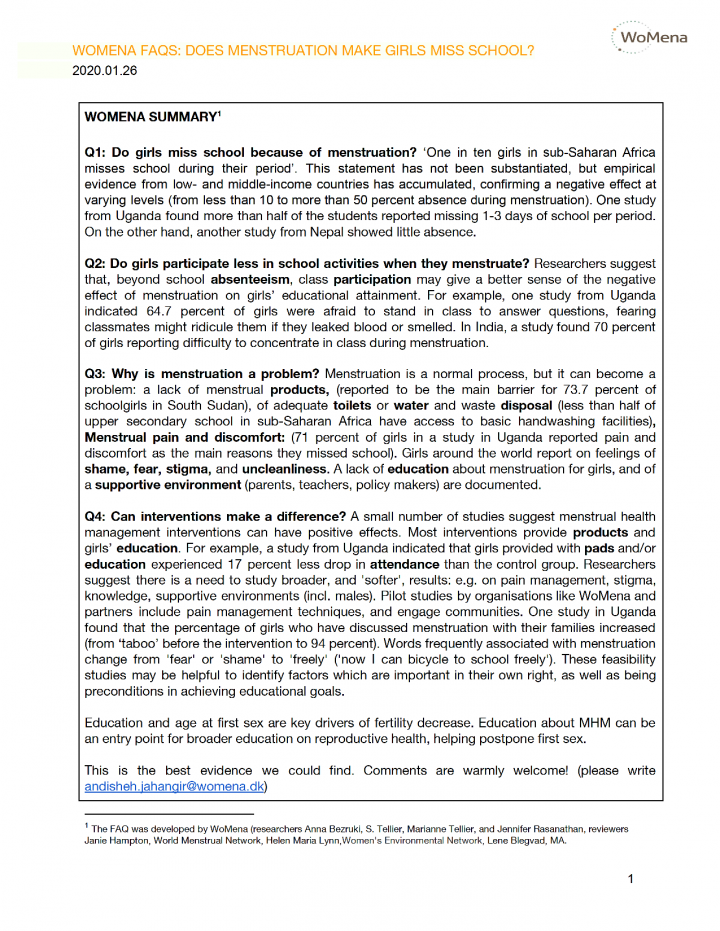 Q1: Do girls miss school because of menstruation? ‘One in ten girls in sub-Saharan Africa misses school during their period’. This truism has not been substantiated, but empirical evidence from low- and middle-income countries has accumulated, confirming a negative effect at varying levels (from less than 10 to more than 50 percent absence during menstruation). One study from Uganda found more than half of the students reported missing 1-3 days of school per period. On the other hand, another study from Nepal showed little absence.

Q2: Do girls participate less in school activities when they menstruate? Researchers suggest that, beyond school absenteeism, class participation may give a better sense of the negative effect of menstruation on girls’ educational attainment. For example, one study from Uganda indicated 64.7 percent of girls were afraid to stand in class to answer questions, fearing classmates might ridicule them if they leaked blood or smelled. In India, a study found 70 percent of girls reporting difficulty to concentrate in class during menstruation.

Q3: Why is menstruation a problem? Menstruation is a normal process, but it can become a problem: a lack of menstrual products, (reported to be the main barrier for 73.7 percent of schoolgirls in South Sudan), of adequate toilets or water and waste disposal (less than half of upper secondary school in sub-Saharan Africa have access to basic handwashing facilities), Menstrual pain and discomfort: (71 percent of girls in a study in Uganda reported pain and discomfort as the main reasons they missed school). Girls around the world powerfully report on feelings of shame, fear, stigma, and uncleanliness. A lack of education about menstruation for girls, and of a supportive environment (parents, teachers, policy makers) are documented.

Q4: Can interventions make a difference? A small number of studies suggest menstrual health management interventions can have positive effects. Most interventions provide products and girls’ education. For example, a study from Uganda indicated that girls provided with pads and/or education experienced 17 percent less drop in attendance than the control group. Researchers suggest there is a need to study broader, and 'softer', results: e.g. on pain management, stigma, knowledge, supportive environments (incl. males). Pilot studies by organisations like WoMena and partners include pain management techniques, and engage communities. One study in Uganda found that the percentage of girls who have discussed menstruation with their families increased (from ‘taboo’ before the intervention to 94 percent). Words frequently associated with menstruation change from 'fear' or 'shame' to 'freely' ('now I can bicycle to school freely'). These feasibility studies may be helpful to identify factors which are important in their own right, as well as being preconditions in achieving educational goals.

Education and age at first sex are key drivers of fertility decrease. Education about MHM can be an entry point for broader education on reproductive health, helping postpone first sex.