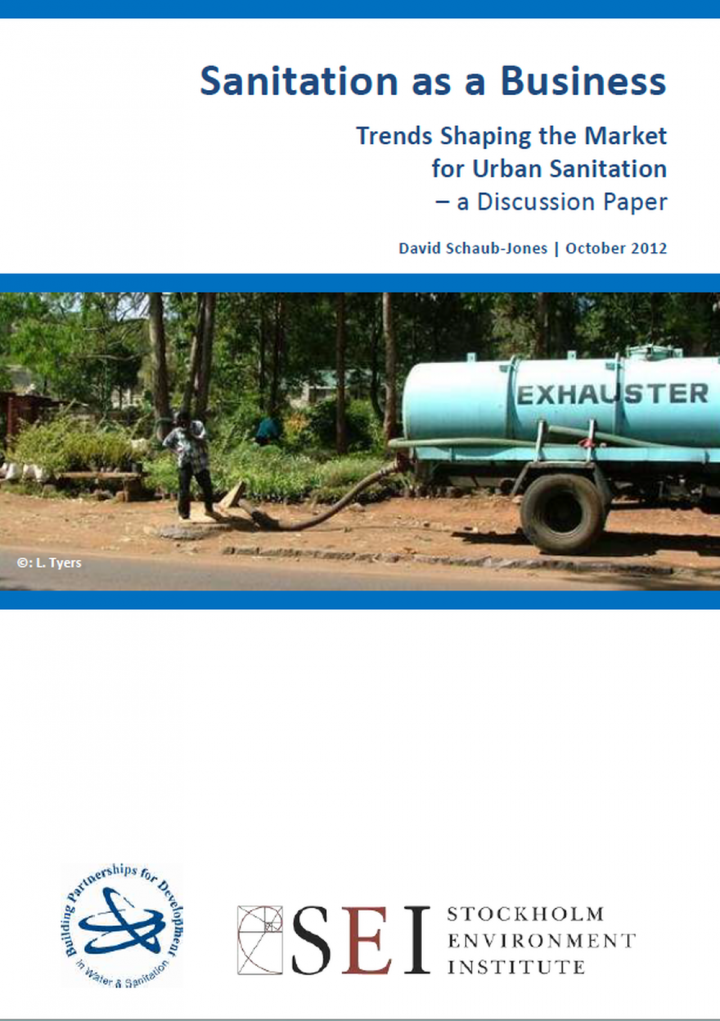 In November 2011, Jefferson County, Alabama made world news by filing for the largest-ever American municipal bankruptcy. Bad housing loans? Pension liabilities too great? No, it was the huge cost of investing in new sewers that tipped them over the edge.

Around the same time, a thousand miles to the North, the municipalities on Cape Cod, Massachusetts, were holding public meetings to discuss options for dealing with their own waste burden. 1 Nitrates from the tens of thousands of septic tanks are leaking into the groundwater, posing pollution concerns - decentralised treatment seems to them to offer a robust and perhaps cheaper alternative to investing in a centralised sewerage system.2

In America, as in most OECD countries, urban sanitation is usually dealt with through centralised sewer networks. Yet, as the above examples demonstrate, this is not a cheap option – networks to collect and treat sewerage often cost more than the networks that distribute water to the households in the first place. This is one reason that sewer networks are much rarer in developing countries. For instance in Sub-Saharan Africa the majority of urban households is not connected to the sewerage network.

A centralised network to capture, transport and treat household waste is most efficiently managed by a single body. Consequently the sewerage network is typically managed by the same organisation that is responsible for distributing water to households in the first place – sometimes a department of the municipality, sometimes a separate ‘water and sewerage company’. However these organisations rarely deal directly with the sanitation issues of households that are not connected to their network - as a consequence the ‘market’ for dealing with this aspect of sanitation is more fragmented. And a market it often is, with both formal and informal providers offering their services.

Meanwhile, an increasingly urbanised world faces a growing sanitation challenge. Given the difficulty that many African cities are having even maintaining their existing sewerage networks, never mind expanding them, increased interest is being shown in the market for services that lies outside that network. Concerns about climate change and water scarcity are also driving interest into alternatives to systems that require significant quantities of water to flush and transport toilet waste (water that must then be cleaned again before returning it to the environment). The Bill & Melinda Gates Foundation ‘Reinvent the Toilet’ campaign is but one manifestation of this. A further consequence is renewed interest in the potential of small, medium and large businesses working in sanitation. If the toilet is to be reinvented, new markets exist in getting this to customers (building on growing momentum that already exists around ‘sanitation marketing’). Businesses already exist to empty the waste from urban toilets and transport it to treatment and / or disposal sites. In Africa the activity of treating sanitation waste is often a government function. Nevertheless, inroads are slowly being made that are bringing private enterprises into this market too.

In light of the above, the discussion around ‘sanitation as a business’ is gaining considerable momentum. Yet whilst this concept has been featuring prominently in sector debates, it is also maddeningly imprecise. As a term it is so broad that it can be taken to mean almost anything from large multinationals investing in bleach and other household cleaning products, to small NGOs supporting CBOs that offer localised sanitation services on a ‘cost recovery’ basis.

As a consequence it is sometimes difficult to have conversations that actually contribute to greater understanding and more learning across programmes. Our approach to dealing with this, in this paper, is to take one aspect of the “Sanitation as a Business” debate (emptying and transport) and to use this as a means to highlight some of the issues and broader trends that affect the entire ‘urban sanitation market’.