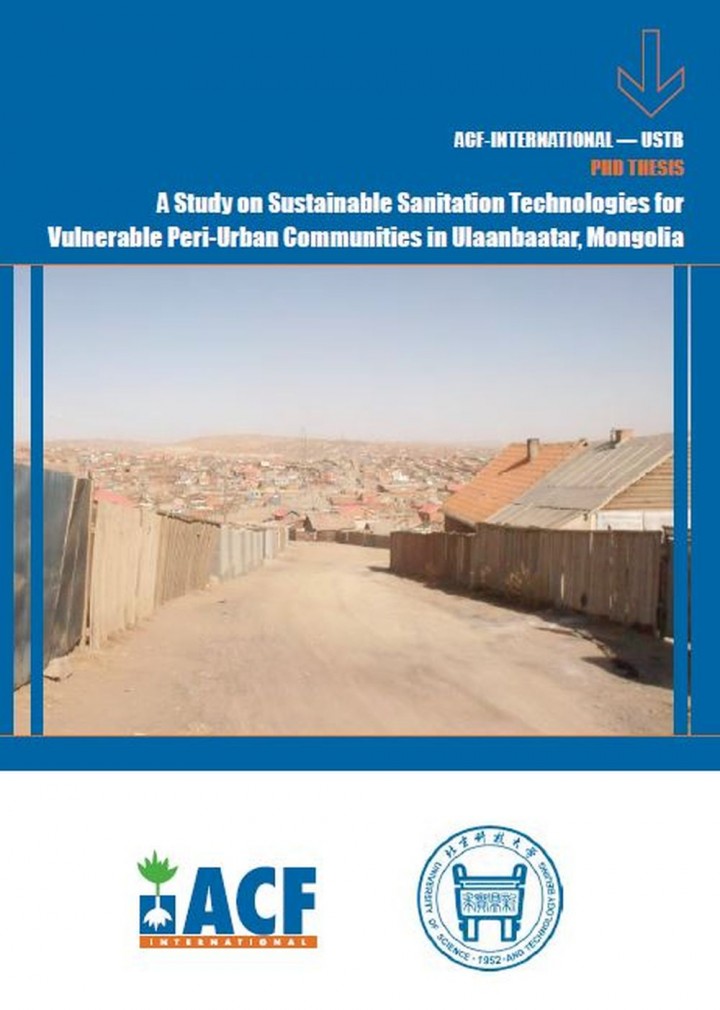 In many of the world’s undeveloped or partially-developed countries, and even in some developed ones, frequent outbreaks of various water, sanitation and hygiene (WASH)- and greywater-borne diseases are still prevalent due to lack/absence/failure of WASH system. As a result, poor sanitation accounts for the death of a child every 20 seconds which leads to 1.5 million preventable death each year. Therefore development of alternative sanitation Technologies which are sustainable can be a problem-solver in the field of WASH, can be one of the options to tackle the WASH- and greywater- borne challenges around the world including Mongolia. This study was carried out for the first time in the coldest capital in the world, namely Ulaanbaatar, Mongolia during the period of 2012 and 2014 to assess technical feasibility, replicability and social acceptability of various sustainable sanitation technologies (e.g. eco-toilets, greywater and human feces treatment technologies) for the vulnerable communities.

The results from Ice-Block Greywater Treatment Unit (IB-GWTU) show that the Maximum removal rates of chemical oxygen demand (COD), NH4+, NO2-, total suspended solid (TSS), PO4-, and Escherichia coli were up to 98%, 99%, 97%, 97%, 87%, and 98% respectively. As for Greenhouse Greywater Treatment Unit (GH-GWTU), the maximum removal rate of over 90% of those parameters was achieved. Both technologies have high potential to significantly reduce chemical and biological contaminants.

Results from composting human feces in Semi-Centralized Winter Composting Unit (SC-WCU) shows that the temperatures above 55 and 65ºC were maintained for 2 weeks and more than a week respectively, which satisfies all the sanitation requirements including World Health Organization and Germany standard. In the Semi-Centralized Greenhouse Composting Unit (SCGHCU), over 70ºC of pile temperature was achieved which meet the international standards in terms of temperature and pathogen die-off. Biological test results indicated that there was not a single Salmonella and E.coli found in the compost and the compost meet the standard of heavy metal content. The study confirmed that the greywater and human feces treatment units are technically feasible towards meeting international standards/guidelines for greywater reuse and compost products, and able to significantly contribute to develop sustainablesanitation System and to close the study area’s sanitation loop in a manner that could be replicable in other parts of the world. Alternative and re-invented financial sources such as micro-finance, social capital, corporate WASH responsibility can be considered as potential sources of funding for replicating technologies and services in the study area and these can be applied in other parts of the low and middle-income regions of the world. An integration of Safe Water Supply and Sustainable Sanitation System is highly suggested to decrease the prevalence of WASH-borne diseases and to reduce the mortality rate at global level.