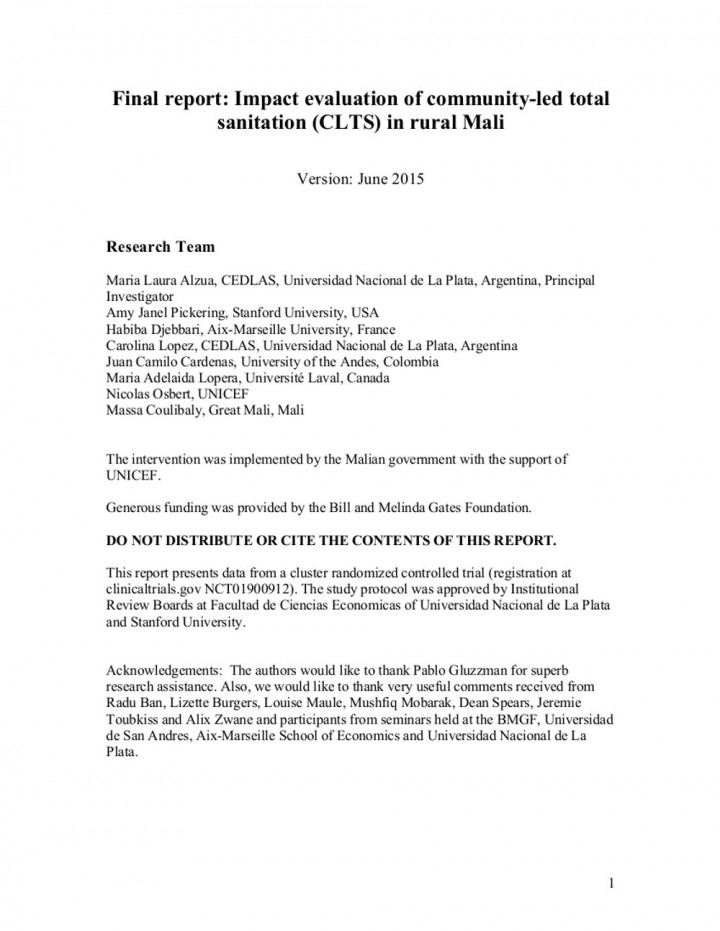 This report covers the main findings of the impact evaluation conducted of a communityled total sanitation (CLTS) campaign implemented by the government of Mali (Direction Nationale de l’Assainissement) with the support of UNICEF. We conducted a clusterrandomized controlled trial among 121 villages randomly selected from the district of Koulikoro in order to evaluate health and non-health program impacts. Baseline data was collected during April-June 2011, the CLTS intervention program was implemented between September-June 2012, and follow-up data was collected in April-June 2013. A total of 4532 households were enrolled at baseline and 4299 were visited at follow up; 89% of baseline households (N=4031) were successfully matched to a household at follow up. The primary outcomes presented in this report are reported for those households present at both baseline and follow up.

The CLTS campaign was highly successful in increasing access to private latrines, improving the quality of latrines, and reducing self-reported open defecation. Access to a private latrine almost doubled among households in CLTS villages (coverage increased to 65% in CLTS villages compared to 35% in control villages). Self-reported open defecation rates fell by 70% among adult women and men, by 46% among older children (age 5-10), and by 50% among children under five. Children too young to use latrines were also more likely to use a child potty in CLTS villages. The program also increased perceived privacy and safety during defecation among women. Observations by field staff support respondent-reported reductions in open defecation, use of cleaner latrines, and improved hygiene in CLTS villages. Latrines in the CLTS households were 3 times more likely to have soap present (prevalence ratio [PR]: 3.17, 95% CI: 2.18-4.61) and 5 times more likely to have water present (PR: 5.3, 95% CI: 3.49-8.05). Latrines at CLTS households were more than twice as likely to have a cover over the hole of the pit (PR: 2.78, 95% CI: 2.24-3.44), and 31% less likely to have flies observed inside the latrine (PR: 0.79, 95% CI: 0.68-0.93). CLTS households were also half as likely to have piles of human feces observed in the courtyard (PR: 0.54, 95% CI: 0.37-0.79).

Statistically significant impacts on child diarrheal or respiratory illness were not observed among children under five years of age when analyzing follow-up data only. It should be noted that even though randomization occurred after baseline data collection was complete and socio-economic characteristics were balanced across groups, most symptoms of diarrheal and respiratory illness were more prevalent in CLTS villages at baseline.

We measured self-reported all-cause and cause-specific under-five child mortality among the study population as a secondary outcome. Each household was asked to report the age and gender of any household member that had died in the past 12 months and the cause of death. There was no significant difference in all-cause mortality between control and treatment arms (Poisson regression, robust standard errors at the village level). We found a 53% reduction in diarrheal-related under-five mortality in CLTS villages (RR: 0.47, Robust Std. Err. 0.18, 95% CI: 0.23-0.98; N=23 child diarrheal deaths in control, N=11 child diarrheal deaths in CLTS).

In addition, we designed a series of experimental games to measure the role of cooperation in the success of CLTS. We conducted these games over all 121 communities included in the study sample and at both baseline and follow-up. About one half of households in each community were randomly invited to participate to the games. All games were incentivized using valued items (rather than cash). We find a positive and statistically significant impact of the CLTS program on game contributions, indicating that pro-social behavior increased in these communities.

This study provides evidence that a pure behavioral intervention with no monetary subsidies substantially increased access to sanitation facilities in rural Mali. Latrines were also cleaner and better stocked with handwashing supplies in treatment villages, indicating improved hygiene behavior. Our findings suggest CLTS improved child growth and reduced the prevalence of stunting among children. However, the program did not have a significant impact on self-reported diarrheal illness, thus the program may have impacted child growth and mortality through pathways other than preventing diarrhea, such as reducing the subclinical condition of environmental enteropathy via decreased exposure to environmental fecal contamination.

The intervention was implemented by the Malian government with the support of UNICEF.
Generous funding was provided by the Bill and Melinda Gates Foundation.