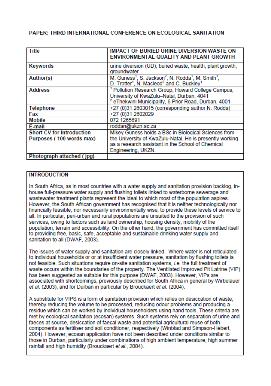 The South African government has set as a strategic objective the provision of access to an appropriate, effective and sustainable sanitation service for all. The Ventilated Improved Pit Latrine (VIP) has been suggested as suitable for this purpose (DWAF, 2003). However VIPs have shown certain shortfalls as on-site sanitation services. A substitute for VIPs is a form of sanitation provision which relies on desiccation of the waste matter, thereby dramatically reducing the volume to be processed, reducing odour problems, and producing a sludge which can be worked using hand tools. These criteria are met by some of the ecological sanitation (ecosan) systems. These systems rely on separation of the urine and faecal components at source, desiccation of the faecal component, and potential agricultural re-use of both components as fertiliser and soil conditioner, respectively. However, none of the applications described have been tested sufficiently under conditions similar to those in Durban.

In an attempt to address the shortfalls of the VIP system with the necessary urgency, eThekwini Municipality have adopted a variation of ecological sanitation which, at present, uses the technology simply as an on-site sanitation system and does not consider any re-use possibilities. The system adopted by eThekwini Municipality provides a dignified enclosed superstructure containing a urinal and a toilet pedestal which allows for separation of the urine and faecal components. The urine is directed to a shallow soakaway and dissipates by a combination of evaporation and percolation. The faecal component is stored in an aboveground vault beneath the toilet. The design implemented by eThekwini provides for a double vault, with the pedestal to be moved from the first to the second vault when the first is filled. Sand is added after each deposition to counteract fly and odour problems and to promote drying. Once a vault is filled, the contents are left dormant for the period required for the second vault to fill. During this period the heap is intended to desiccate, contributing to pathogen die-off and to limited degradation of the waste. It is this latter component which remains untested under Durban conditions, where high rainfall and humidity, particularly during the summer months, may interfere with the desiccation process. An urgent research question is thus the drying rate in this dormant vault , and is addressed in another presentation.

The current recommendation of eThekwini Water and Sanitation for the fate of the vault contents, once the vault is emptied at the end of the dormant period, is burial on-site with planting of a tree above the site in order to mark it. A number of further research questions arise from this. Since the interior of the waste heap is likely to be dominated by anaerobic conditions, and since such conditions are likely to persist during burial, it is unknown at what rate the organic component of the buried waste will degrade. It is not clear if deep-rooted plants, planted above the site of burial, will be able to tolerate the anaerobic conditions of the degrading waste. Furthermore, it is not known whether persistent pathogens present in the waste – most particularly the eggs of helminth parasites such as Ascaris – will move upwards through the soil to the soil surface, will persist in the buried waste, or will move down through the soil and potentially contaminate groundwater. This study investigates growth of shallow and deep-rooted plants in soil above buried waste, degradation of the organic component of the waste, and the potential for buried pathogens to contaminate surface soil, plant matter growing in the soil and groundwater beneath the site of burial. It represents a joint initiative between the University of KwaZulu-Natal and eThekwini Municipality.