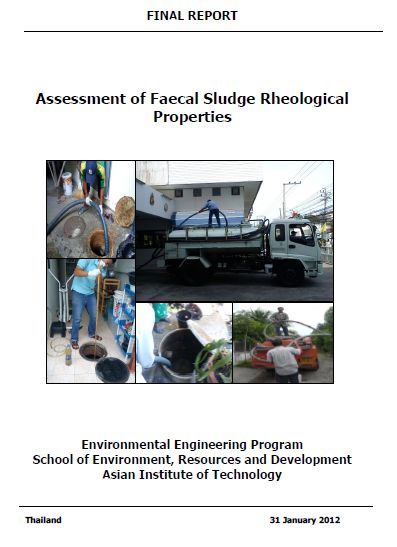 Based on field observation of onsite treatment system configuration demonstrated that total volume of onsite systems in Thailand such as septic tank, one cesspool, two cesspools in series and commercial septic tank were range of 0.4 – 6.3 m3/ household which the average of 1.48, 1.42, 1.35 and 1.42 m3, respectively. The variation of total volume probably was due to type of onsite treatment system and location of the community. Considering sludge accumulation rate illustrated that one cesspool present the highest of average accumulation rate which about 300 L/cap/year while the other system shown about 135 – 180 L/cap/year.

Samples were collected from two parts, wet fluidized sludge and wet bottom sludge. Dried sample was developed from wet bottom sample. Results indicate that the maximum density of wet bottom sludge were not significantly different among different studied areas which ranged between 1.0923-1.1585 g/cm3. The average viscosity from septic tank system, one cesspool system, two cesspools in series system and commercial system were presented about 25.3, 52.4, 77.7 and 77.6 cP, respectively.