A guide to the development of on site sanitation 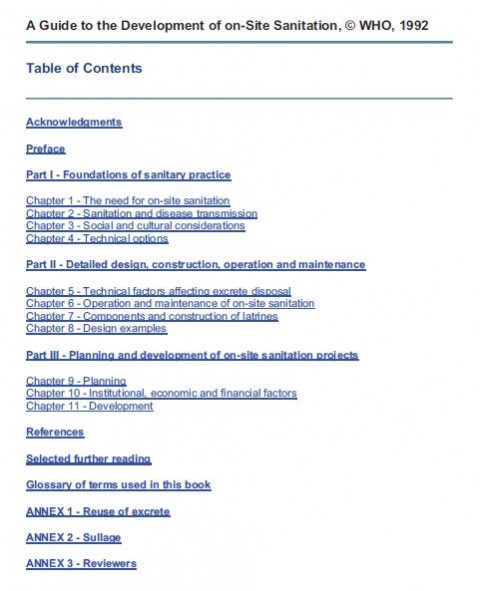 For nearly thirty years, the names Wagner and Lanoix have recurred time and time again in connection with water supply and excrete disposal for rural areas and small communities. Their two volumes published by the World Health Organization in the late 1950s (Wagner & Lanoix, 1958, 1959) have stood the test of time.

Since their publication, there has been a massive increase in interest in water supply and sanitation, partly associated with the International Drinking Water Supply and Sanitation Decade (1981-1990). Many countries prepared programmes for the Decade that included optimistic forecasts for the provision of sanitation, but achieving the objectives has proved to be difficult. The majority of people living in rural areas and on the urban fringes in developing countries still lack satisfactory sanitation.

Some excellent publications, dealing with various aspects of appropriate technology for sanitation, have been produced by the World Bank and others. Much of the technology is a refinement of already known and practiced methods, based on experience in a number of developing countries in Africa, Asia and Latin America. However, emphasis has been given to socioeconomic aspects of planning and implementing sanitation mprovements.

This publication has therefore been prepared in response to these developments, as an update of Wagner & Lanoix's work, on which it draws heavily. The change of title is intended to focus attention on sanitation facilities on the householder's property, which are appropriate for some urban areas, as well as rural areas and small communities.

The book has three parts. Part I deals with the background to sanitation - health,sociological, financial and institutional issues, and the technologies available for excrete disposal. Part II provides in depth technical information about the design, construction, operation and maintenance of the major types of on-site sanitation facility, while Part III describes the planning and development processes involved in projects and programmes. Annexes on reuse of excrete and sullage disposal are also included; although connected with on-site sanitation, these are primarily off-site activities.

The book has been compiled with the needs of many different readers in mind. The authors hope that it will prove useful for engineers, medical officers and sanitarians in the field, and also for administrators, health personnel, planners, architects, and many others who are concerned with improving sanitation in rural areas and underprivileged urban communities in developing countries.

The views expressed in this publication reflect the authors' field experience in many developing countries, supplemented by discussion with other workers and study of recent publications. The book in its final form has greatly benefited from the comments of the reviewers listed in Annex 3, whose experience and knowledge are internationally recognized. Special thanks are due to Mr J. N. Lanoix for his thorough review and comments, and to M. Bell, A. Coad, A. Cotton, M. Ince and M. Smith of EDC for their invaluable input.

Although every effort has been made to represent a world view, the uthors have been constantly aware of great variations in practices in different continents, countries and districts. Sometimes what is quite satisfactory for one community is rejected by other people living nearby. When pplying the information given in this book it is wise to follow the advice of Dr E. F. Schumacher: "Find out what the people are doing, and help them to do it better."

Franceys, R., Pickford, J., Reed, R. (1992). A guide to the development of on site sanitation. World Health Organization (WHO)