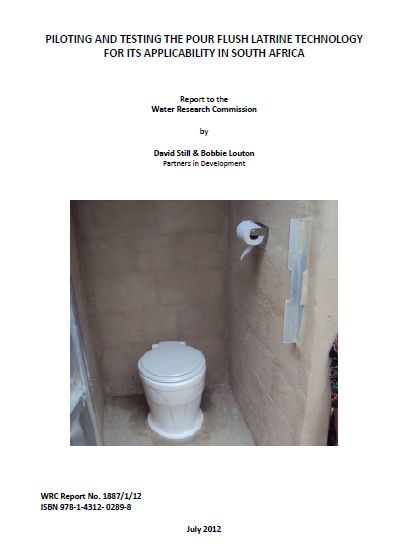 This project investigated the potential for modifying the pour flush design, which is used widely in Asia, to meet the needs of the South African context. The development and application of pour flush systems in Asia was studied. Three case studies were conducted to investigate the experience of South Africans with low flush systems in the past and related technologies were surveyed. A prototype was developed and tested after which the technology was piloted in twenty homes for usage periods of up to eighteen months. The systems were monitored over the course of the project and performance and user experience were assessed at the end of the project.

The following key findings have come out of this study (shortened from full report):

• South African experience with low flush systems. User perceptions expressed during the case studies conducted in this study with the DSA and Hungerford Schroeder low flush systems indicated that users perceived a number of problems with their systems. While some experimental aspects of the design of these systems may have led to operational problems over time, there is clearly a complex relationship between a number of factors which contribute to the success or failure of a system: system design, correct installation, availability of replacement parts, user behaviour and user attitudes – which can be influenced to a large extent by political and social dynamics.

• Design. The pour flush system developed in this study has proven successful over the first 18 months of testing. To date, only one blockage has been experienced in any of the 20 systems, and this was caused by a child flushing a plastic bag down the toilet. The one litre flush has proved adequate for typical situations, with a two litre flush sometimes used where there is a particularly long sewer leading to the soak pit.

• User satisfaction has been high and visitors to the homes where the technology was piloted expressed an interest in the pour flush model. Responses indicate that the pour flush system adequately addresses the wish of many dry sanitation users for a flush toilet, with the political, social and logistical considerations involved.

• Newspaper. The toilet proved robust enough for newspaper to be flushed without blocking the system during testing. While all households were provided with an initial pack of toilet paper and encouraged to use toilet paper if possible, it was also explained to householders how to flush with newspaper if necessary. Two households have begun to use newspaper without difficulty.

• Cost. This technology is considerably less costly than installing a full flush toilet connected to a sewer or a standard septic tank. In addition, it is not dependent on a piped water supply and can be used even if the water supply is cut off occasionally, as a small amount of water is required and greywater can be used.

• Rubbish. All respondents indicated that they do not use the toilet for disposal of any other waste. Some personal items were observed in some pits a year after construction, however, in a community that has no reliable rubbish collection. The presence of waste in the pit could present difficulties when the pit needs to be emptied.