Case study on sustainability of rural sanitation marketing in Vietnam 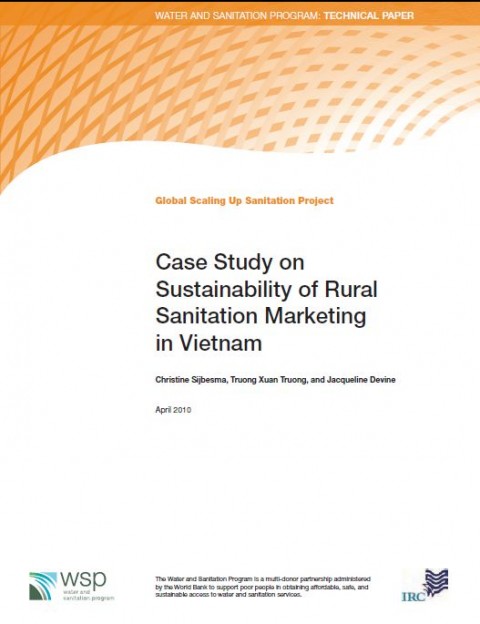 From 2003 to 2006, a rural pilot project was conducted in Vietnam with technical support from the non-governmental organization (NGO) International Development Enterprises (IDE) and funding from Danish International Development Assistance (DANIDA). The project tested whether
a sanitation marketing approach could improve rural access to sanitary toilets in 30 communes in six districts of the coastal provinces of Thanh Hoa and Quang Nam.

The project trained promotion teams consisting of local health workers, Vietnam Women’s Union leaders, and village heads, as well as small providers (shopkeepers, producers, and masons). These teams, in turn, promoted sanitary toilets and helped households to build the type of toilets they wanted and could afford. The pilot project trained over
2,000 government staff, Women’s Union leaders, small entrepreneurs, and trainers. After 3.5 years, over 15,000 households had gained access to a sanitary toilet in the pilot area out of 32,000 households targeted. This number was 2.5 times the increase achieved under a conventional
sanitation program conducted in the three preceding years. Average access grew from 16% to 46%.

Three years after the end of the pilot program, WSP contracted IRC/ADCOM to design and carry out a case study to investigate the sustainability of the rural sanitation marketing approach. The main research question was
whether the outputs and outcomes had been sustained after the external support had ended. Other research questions were used to determine if the approach had spread to neighboring communes (“spill-over effect”), if the districts had extended the approach district-wide (“scaling-up effect”), and if there were signs of spontaneous marketing developments ( “parallel development”). The case study was conducted in a purposively selected sample of eight communes in four districts of the two provinces. Four
matched communes that did not participate in the pilot but were located in other parts of the same districts served as a comparative group.
Research for the case study took place between June and August 2009. Local sanitation statistics were collected in all study communes. Semi-structured interviews were held with the promoters, providers, and some local government authorities. Interviews were held with district and provincial authorities and at a national level with the NGOs, national authorities, and donors involved in rural sanitation.

With the help of participatory tools, focus group discussions were held with 61 householders who had built sanitary toilets or upgraded their unsanitary ones, and 60 householders who had either no toilet or a still unsanitary one. Finally, the study team visited a very small and nonrandom
sample of installed toilets to observe the quality of construction and hygiene as per the national standards of the Ministry of Health.