Review of safe disposal of feces 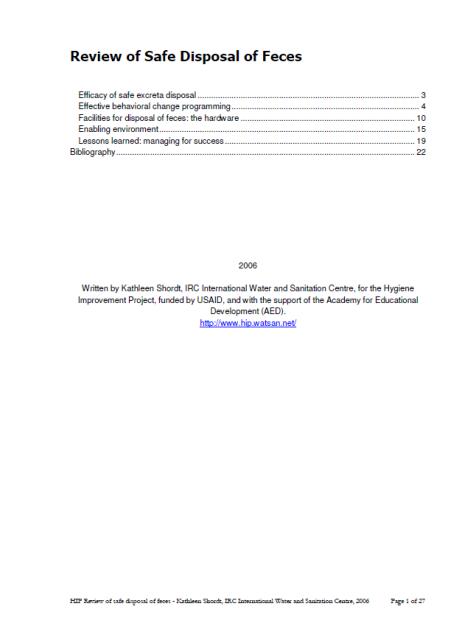 In 2004, at the mid-term assessment of progress toward meeting the Millennium Development Goals, it was estimated that over 2.6 billion people still did not have access to improved sanitation, in the sense of safe excreta disposal. The situation is most serious in Asia and Sub-Saharan Africa. World-wide, twice as many people lack access to improved sanitation facilities as lack access to improved water supply; and, four out of every ten people do not even have or use a simple pit latrine (Lenton, 2005; WHO/UNICEF, 2004). This has significant health repercussions because indiscriminant defecation near the home is associated with increased morbidity and mortality, specifically, the incidence of diarrhoea (Stanton & Clemens & 1987; Han & Moe 1990; Curtis 2000) and worm infestation (Olson, 2001; Mara, 1999). This paper provides an overview of experience and research about the benefits, strategies and technologies for improved disposal of human excreta. Reference is also made to a rich and growing pool of program experience that can be built upon the address this challenge cost-effectively. The technology for safe excreta disposal usually requires some form of a toilet with pits or tanks of various designs or sewerage system, as distinguished from open air defecation, open channels and pits. However, research in such varied locations as Bangladesh, India, Indonesia, Malawi, Peru, Sri Lanka and Vietnam demonstrates that facilities and construction interventions alone are often not sufficient to provide a health advantage (Hill, 2004; Curtis, 2000, Bateman, 1995, Cairncross et al, 2004; Robinson, 2005; Varley, 1998). Typical of these findings, in 2005 the Asian Development Bank published an audit report of a project in Indonesia showing that in the 80 communities where some form of toilet was constructed in the absence of hygiene promotion, only about 30% were still being used after the intervention ended (Murray, 2005).