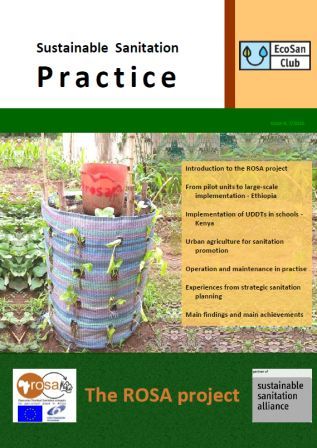 During the last years EcoSan Club was partner of the ROSA project. The ROSA (Resource-Oriented Sanitation concepts for peri-urban areas in Africa) project proposed resources-oriented sanitation concepts as a route to sustainable sanitation and was funded within the EU 6th Framework Programme, Sub-priority "Global Change and Ecosystems". The project had duration from October 2006 to March 2010 and was implemented in four pilot cities: Arba Minch in Ethiopia, Nakuru in Kenya, Arusha in Tanzania, and Kitgum in Uganda.

The EU-funded ROSA project (Resource-Oriented Sanitation concepts for peri-urban areas in Africa) proposed resources-oriented sanitation concepts as a route to sustainable sanitation. Within ROSA these concepts have been applied in four pilot cities: Arba Minch in Ethiopia, Nakuru in Kenya, Arusha in Tanzania, and Kitgum in Uganda. These cities each have a population between 40'000 and 500'000 inhabitants and represent typical cities in Eastern Africa. The paper describes the general concepts that form the basis for the ROSA project, describes the ROSA pilot cities and gives an outlook on the SSP ROSA special issue
++++++++
From pilot units to large-scale implementation - the case of Arba Minch, Ethiopia
Ayele Shewa, W., Kassa Ayano, K., Meinzinger, F.

Within the framework of ROSA, in Arba Minch several pilot units have been constructed for the treatment and safe use of human excreta, greywater and solid waste. Different types of toilets have been constructed: 16 urine-diversion dry toilets (UDDTs), 30 fossa alternas and 9 arborloos. The initial units were built for demonstration purposes and therefore the construction costs have been fully covered by the ROSA project. The remaining units were built with shared costs. The community of Arba Minch liked the toilets and the demand was increasing. Construction of toilets started in large numbers without any subsidies. Up-scaling is supported by the Dutch funded SPA programme under which persons that are willing to build a toilet can get loans for this purpose.
++++++++
Implementation of urine-diversion dry toilets in schools in Nakuru, Kenya
Gacheiya, R., Mutua, B.

Schools have been chosen as institutions for constructing ROSA pilot units. On the one hand, schools have been identified as good invention points for introducing sanitation systems. A huge number of persons can be reached as a big number of students are using the toilets in the school and further students bring the news about their new school sanitation system home to their families. On the other hand, there is a huge lack of sanitation facilities in schools and it has been reported that a lack of toilets disadvantage girls. In the case that the school has no toilets, girls do not attend during their menstruation periods resulting in a loss of weeks attending school and finally in less success in school. Against this background, this paper describes the implementation of improved and sustainable sanitation systems in two model schools in Kenya.
++++++++
Urban agriculture as means to create demand for sanitation products
Tendwa, O., Kimaro, T.

Using urban agriculture for creating demand for sanitation products (i.e. liquid and solid fertilizer produced from urine and faeces) is a promising way for up-scaling resources-oriented sanitation systems. In this respect, a demonstration urine-diversion dry toilet (UDDT) has been constructed by ROSA at the Nanenane Exhibition Park (NEP) in Arusha. Additionally, demonstration fields have been set-up to show the benefits of using sanitation products as fertilizers. Nanenane exhibition is an annual event that takes place during the first 10 days of August with the main events on 8 August. This is where the name originates from: ‘Nanenane’ in Kiswahili means “8-8”. The exhibition has been held every year since 1996. The main focus is the agricultural sector but there is fair participation of business institutions and entrepreneurs. ROSA took part in the exhibitions in 2008 and 2009, respectively. The exhibition of the UDDT and demonstration of the fertilizing effect of sanitation products resulted in increasing interest and adoption of the system. Institutions and individuals in Arusha and as far away as 500 to 700 km from Arusha requested for technical assistance to construct UDDTs with their money.
++++++++
The importance of operation and maintenance – Lessons learnt from the ROSA project
Müllegger, E. Freiberger, E.

Operation and maintenance (O&M) is the key for the sustainability of sanitation projects. Therefore, O&M of resources-oriented sanitation systems was one of the main research topics in the four ROSA pilot cities. The research focussed on the acceptance of urine-diverting dry toilets (UDDTs), the financial implications as well as the introduction of services chains, which include the collection, transport and treatment of UDDT products and its use in agriculture. Monitoring of the implemented pilot units took place to obtain more information of the O&M on household level and of the involvement of the private sector.
++++++++
Strategic Planning for Sanitation – A practical experience from the ROSA project
Schreiner, S., Moseti, Y., Lechner, M., Müllegger, E.

The development of Strategic Sanitation and Waste Plans (SSWPs) for the four pilot cities was one of the main objectives of ROSA. Through this planning process, main pre-conditions and difficulties for strategic planning in the pilot cities were identified. The paper shows, why the chosen approach for strategic sanitation and waste planning in the ROSA project has appeared as instructive. ROSA initiated a strategic planning process and laid the ground for further developments. It was intended, that municipalities are taking over the responsibility to institutionalise the process as such. If this is not happening, the SSWPs developed in ROSA will remain a project document only and will not favour an integrated strategic planning process considering all relevant needs of such. So far, the respective municipal bodies of Arba Minch and Nakuru integrated the strategic plan in their agendas.
++++++++
Summary of the main findings and main achievements of ROSA
Langergraber, G., Weissenbacher, N.

During the last 3.5 years (1.10.2006 - 31.3.2010) the ROSA project promoted resources-oriented sanitation concepts as a route to sustainable sanitation. To make it a success the project team aimed at the start of ROSA that the following points should be reached at the end of the project: 1) people like the systems implemented and use it, 2) the systems continue to run after project funding ends and 3) the work ROSA started continues in the involved pilot cities. In general, the achievement of these goals would reflect that the sanitation systems have been implemented in a sustainable way. In this paper the main findings and main achievements of ROSA that have not been presented in the previous contributions are summarised and an outlook on future activities is given.