Beyond Distribution: A Feasibility Study of Introducing a Menstrual Health Component into Four Secondary Schools in Buikwe Districkt, Uganda (Phase 1) 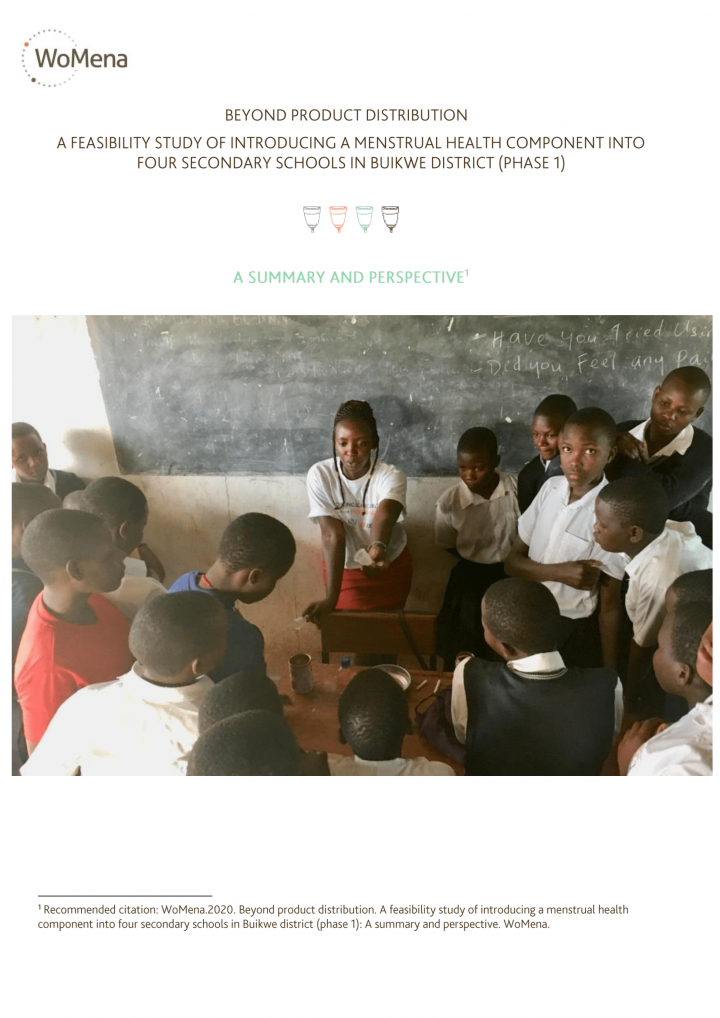 EXECUTIVE SUMMARY
In Sub-Saharan Africa (SSA), menstrual health is often considered a taboo and many girls and women lack access to safe and appropriate menstrual health management (MHM) products. This can have far-reaching implications for women and girls’ physical, social and mental wellbeing, as well as for their sexual reproductive health and rights. These MHM issues are often further exacerbated by insufficient access to safe and private toilets, and lack of clean water and soap for personal hygiene. As a result, many women and girls in SSA have to manage their periods in ineffective, uncomfortable and unhygienic ways, contributing to them feeling shame and restricting them from reaching their full potential in e.g. social, school, or work settings.
In Uganda, the Icelandic International Assistance Development Agency (ICEIDA) is implementing the Buikwe District Fishing Communities Development Programme (BDFCDP) through the Embassy of Iceland, with the primary focus of furthering educational development in the district and decreasing the risk of school dropout. The Embassy noted that students had difficulty meeting costs related to schooling, including costs of menstrual products, which could increase the risk of especially girls dropping out of school. The Embassy therefore asked WoMena Uganda to develop and pilot test a MHM intervention for integrating a menstrual health component into four selected secondary schools in Buikwe District, Uganda, as well as to assess the appropriateness of introducing menstrual cups (MCs) and reusable pads to schoolgirls in the district. Lessons learned from this feasibility study will be used to guide decision making and development of phase 2 of the project to expand and integrate the MHM component into 28 primary schools in Buikwe District.

The pilot intervention was carried out from April 2017 to November 2018. The intervention consisted of a pre-pilot test of 50 women to assess the perceived appropriateness of the MHM reusable products in the adult community in the district, the training of 34 trainers (school personnel) to facilitate and teach the MHM intervention at the four secondary schools, the training of 1,254 beneficiaries (schoolgirls) in MHM methods and the use of MHM reusable products, and the distribution of reusable MHM products (MCs and reusable pads). Quantitative and qualitative data was furthermore collected at baseline and midline to understand the perception and acceptance of the MHM reusable products by the target population in the district as well as to gain insight into the challenges the girls face concerning MHM issues.

Results from baseline and midline survey Quantitative data from the baseline showed that disposable pads were the most commonly used MHM products used by the surveyed girls. However, the survey also showed that almost half of the girls who cited disposable pads as the most used MHM product also reported that they had not been able to afford their preferred product during at least one occasion over the past three months. The majority of the surveyed girls also reported that they had not known what menstruation was when they had experienced their first period, with many of them thinking it was not a normal body function. Menstruation was considered a taboo and the vast majority of the girls only felt comfortable discussing the subject with female friends and family members. Finally, the girls reported that being on their menstruation affected their confidence and participation in school.
Results from midline showed that almost all the surveyed girls had tried the distributed reusable pads and found it to be an appropriate MHM product which they would recommend to female friends and family.
Half of the girls surveyed at midline data collection reported having tried the distributed MC. Most of the girls cited
fear of the MC size and wanting to wait for a school holiday to be able to try it in a more comfortable environment as reasons for not having tried the MC. This was to be expected as it can take the girls up to six months to become
accustomed to the use of the MC (van Eik et al., 2018). The girls surveyed at midline who had tried the MC generally reported a high level of comfort with the product, with the only issue being discomfort with changing it away from home. This could reflect the reported lack of cleanliness of WASH facilities at school, as well as the reported lack of access to soap and toilet paper.
More than 80% of the surveyed girls who had tried the MC reported that they would continue to use the product.
Almost all of the girls who had received a MC reported that they would recommend it to other girls and women in the community, indicating that they perceived the product to be useful and appropriate.