The sanitation ladder – a need for a revamp? 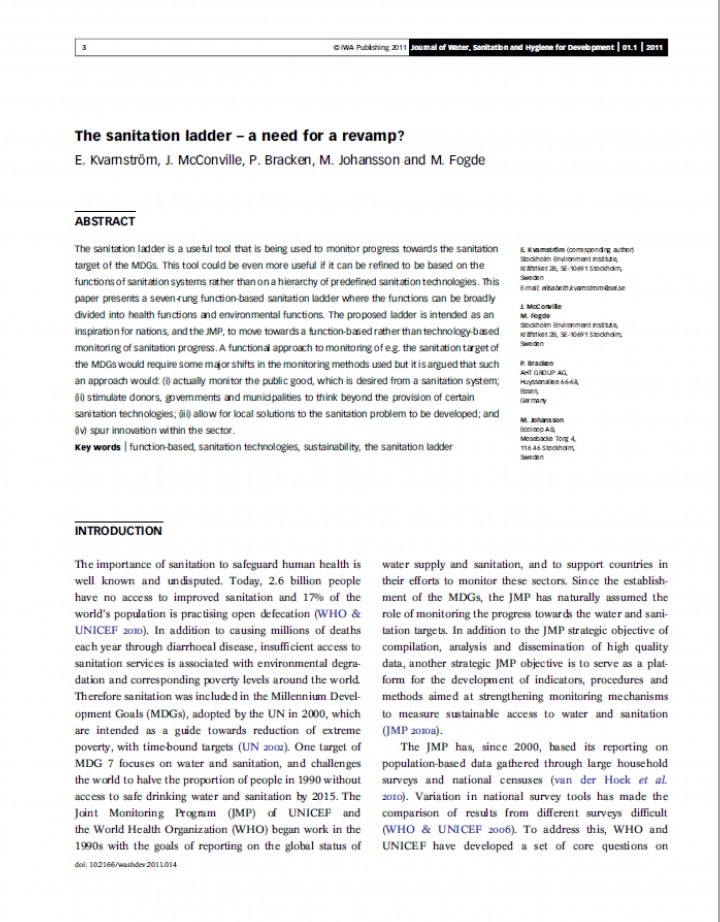 Publisher:
Journal of Water, Sanitation and Hygiene for Development Vol. 1 No. 1 pp. 3–12

The sanitation ladder is a useful tool that is being used to monitor progress towards the sanitation target of the MDGs. This tool could be even more useful if it can be refined to be based on the functions of sanitation systems rather than on a hierarchy of predefined sanitation technologies.

This paper presents a seven-rung function-based sanitation ladder where the functions can be broadly divided into health functions and environmental functions. The proposed ladder is intended as an inspiration for nations, and the JMP, to move towards a function-based rather than technology-based monitoring of sanitation progress.
The aims are a more accurate monitoring of the actual achievements on national levels and a better assessment of the public-good. Also, a spur of the innovation within the sanitation sector is intended.

The sanitation ladder currently used by the Joint Monitoring Program (JMP) of UNICEF and the World Health Organization (WHO) is based on a hierarchy of predefined sanitation technologies. Issues such as the quality, the reliability and the sustainability of facilities are not dealt with.

A functional approach to monitoring of e.g. the sanitation target of the MDGs would require some major shifts in the monitoring methods used but it is argued that such an approach would: (i) actually monitor the public good, which is desired from a sanitation system; (ii) stimulate donors, governments and municipalities to think beyond the provision of certain sanitation technologies; (iii) allow for local solutions to the sanitation problem to be developed; and (iv) spur innovation within the sector.