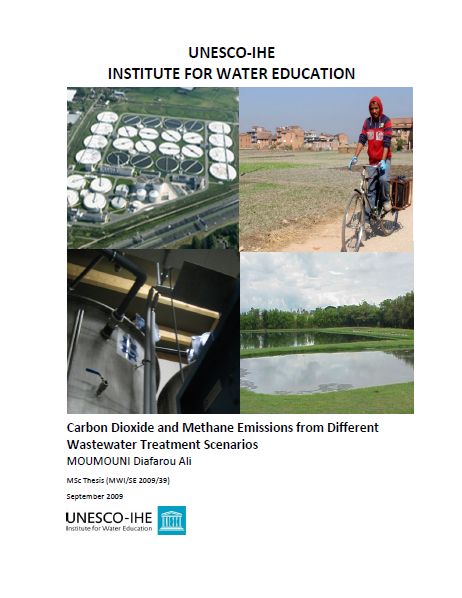 Since the era of industrialization, concentrations of greenhouse gases (GHGs) have tremendously increased in the atmosphere, as a result of the extensive use of fossil fuels, deforestation, improper waste management, transport, and other economic activities (Boer, 2008).This has led to a great accumulation of greenhouse gases, forming a blanket around the Earth which contributes in the socalled “Global Warming”.
Over the last decades, wastewater treatment has developed strongly and has become a very important asset in mitigating the impact of domestic and industrial effluents on the environment. There are many different forms of wastewater treatment, and one of the most effective treatment technology in terms COD, N and P removal, activated sludge is often criticized for its high energy use. Some other treatment concepts have a more "green" image, but it is not clear whether this image is justified based on their greenhouse gas emission. This study focuses on the estimation of GHG emissions of four different wastewater treatment configurations, both conventional and innovative systems namely: (1)
Harnaschpolder, (2) Sneek, (3) EIER-Ouaga and (4) Siddhipur. This analysis is based on COD mass balance, the Intergovernmental Panel on Climate Change (IPCC) 2006 guidelines for estimating CO2 and CH4, and
literature review. Furthermore, the energy requirements for each of the systems were estimated based on energy survey.

The study showed that an estimated daily average of 87 g of CO2 equivalent, ranging between 38 to 192 g, was derived to be the per capita CO2 emission for the four different wastewater treatment scenarios.
Despite the fact that no electrical energy is used in the treatment process, the GHG emission from EIEROuaga anaerobic pond systems is found to be the highest compared to the three other scenarios analysed. It was estimated 80% higher than the most favourable scenario (Sneek). Moreover, the results indicate that the GHGs emitted from these WWTPs are 97% lower compared to other anthropogenic sources like the public transport sector. The innovative sanitation scenarios were found to cause less
environmental burden in terms of energy and GHGs.

Nevertheless, to ensure a positive impact of these treatment systems, an optimum biogas reuse (for the production of electricity and heat), the source separation of human excreta (to disburden the wastewater treatment processes) should be introduced to reduce their GHG emissions.