Dialogue on Water for Sanitation

Another Insight Series Edition with the topic 'Water for Sanitation' -  took place in Delhi, India, on 27th April from 2.30 pm to 5.30 pm at FICCI. The event took place in the course of the India Sanitation Coalition Conclave 2018. 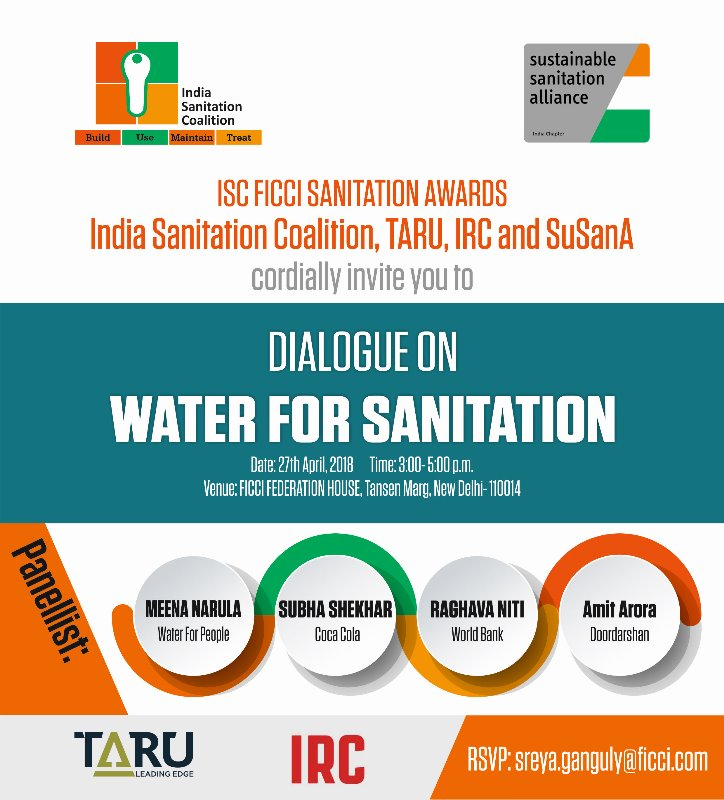 The ‘INSIGHTS’ initiative presents new research findings, demonstrated models, and innovations in the WASH sector that are expected to help policymakers, researchers, as well as social and market players.

In the drive to make 11 crore toilets for making India ODF by October 2019 (Ministry of Drinking Water and Sanitation), one important aspect that has not received adequate attention is -Water for sanitation. Inadequate water for sanitation is one of the key reasons for slip back to open defecation.  Open defecation requires less water, about 1 litre per use. With toilets, mostly pour flush, the requirement has gone up several times to 4 or 5 litres per person per use. Given that just about 16.97% (as per MDWS data) people living in rural India have household? piped water connections, this places a large additional burden to the person fetching water for the household. Mostly, these people for a household are women. They often have to carry it in from a distant source at the cost of their health or their time for other work.  About 46% have a source on premises but the rest have to travel 200-500 m to get water (NSSO 2012).

To address the issue of slippage of ODF villages, MDWS has planned to provide water supply facilities on priority to villages that  are declared ODF. Anecdotal evidence suggests there is a significant time lag between becoming ODF and getting water. Piped water schemes have moved at snail’s pace. Further, some schemes like the Narmada Nal Jal Yojna in Madhya Pradesh suffer from design and supply flaws. Others use ground water that simply dries up in summer leaving taps and toilets parched. Government norms specify a hand pump for 150 people, or 30 households. This has created a substantial category of habitations called partly covered. Government statistics put this at 21.7% of the total number of 1.7 million habitations. Another 12.2% do not have potable quality water, taking the total who officially do not have enough or safe water to 33.9%.

Then there is the source. About 80% of drinking water comes from groundwater. Over the past three decades, groundwater has become increasingly scarce with the rapid expansion of groundwater-fed agriculture. Dug wells and hand pumps that use shallow aquifers are the first to go followed by tube wells for drinking water. Of the 7,928 blocks in the country, the Central Groundwater Board has classified about 14% as over-exploited or dark zones; in both cases further groundwater exploitation is not possible. Added to the scarcity is the quality aspect. Natural and anthropogenic pollutants affect a significant percentage of groundwater. These include salinity, iron, fluoride, arsenic, nitrates, industrial pollutants and untreated domestic sewage.

There are a few solutions to this.

To succeed, the sanitation campaign has to be executed as part of a larger water cycle. The purpose is to improve health but without ensuring adequacy of water for ablutions, and safety of water from pollution, the cycle will not be complete. The toilets may well go in but Swacch Bharat will become another failed mission.

An estimated 62,000 million litres per day (MLD) sewage is generated in urban areas, while the treatment capacity across India is only 23,277 MLD, or 37% of sewage generated, according to data released by the government in December 2015 (The Wire, 2016).

Over the past few years, there has been an increase in the sewage levels that are dumped into the water bodies. According to WaterAid India, approximately 80% of Indian sewage flows untreated into country’s rivers. A study was conducted to explore the linkages between water bodies in Delhi and resettlement colonies by GIS mapping based study done by an NGO,  FORCE, and funded by GIZ as a part of its ICPP programme.

The results brought to light startling facts: the resettlement colonies were plagued by sanitation problems from the day they were conceptualized because  they were located within the core catchment of one or more water bodies. In 90% of the cases, water bodies are located either within the boundaries of the resettlements or within a 1.5 km buffer zone. Thus, the land selected for the resettlements was topographically placed in a depressed zone. As a result, there was an inherent tendency of the area to be waterlogged, which was even confirmed by the residents in that area. Also, the negative slope would make it difficult or very expensive to link the area’s internal sewerage and drainage with the peripheral trunk lines.

In the Master Plan 2041 for Delhi that is under preparation, lakes and wetlands are proposed to be safeguarded. They are to be considered for their ecological value, ground water recharge, flood control and recreation. Only treated sewage is to be released into these water bodies. However, this approach raises many questions. Why have water bodies become receptacles of sewage? Are they valued for the land beneath them rather than their other functions? What the roles of the government, people and courts in safeguarding them? Is there an opportunity for them as decentralized waste water treatment points? (thereby also becoming sources of uncontaminated groundwater recharge).

For this Dialogue, we are proposing the following guiding questions: